The Militarization of Indian Country 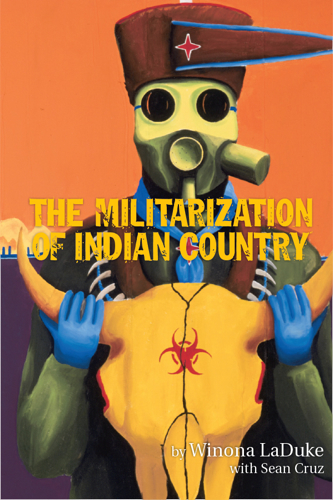 When it was recently revealed that U.S. Navy Seals had codenamed Osama bin Laden “Geronimo,” members of the Native American community were insulted that a Native patriot’s name had been used as a moniker for the most wanted terrorist in the world.

As Winona LaDuke’s newest book demonstrates, the appropriation of Native names and imagery by the U.S. military is nothing new, from Blackhawk and Kiowa helicopters to “Shock and Awe” campaigns, a reference to the Wounded Knee Massacre.

From their use of Native names to the outright poisoning of Native peoples for testing, the U.S. military’s impact on Indian Country has a long and troubled history and is, as evidenced by recent events, ongoing.

LaDuke’s stirring book delves into the present and past of the U.S. military, as well as America’s fascination with Native Americans and their culture. The book examines decades of nuclear testing, weapons testing, chemical weapons storage, and bombing of Native American lands.

The author also discusses the cultural change in Native communities associated with militarization and the fact that Native America has the highest proportion of living veterans as well as the highest levels of enlistment.

Sean Aaron Cruz is Executive Director of 1000 Nations and a co-founder of The Friends of Celilo Falls. He is the organizer of the Jim Pepper Native Arts Festival. He is co-author of Winona LaDuke's new book, "The Militarization of Indian Country." He is the father of four children who disappeared into Utah in a Mormon abduction in 1996, and the author of Oregon's landmark anti-kidnapping statute "Aaron's Law" (Senate Bill 1041), named for his late son Aaron Cruz. He writes online as Blogolitical Sean.
View all posts by 1000nations →
This entry was posted in Uncategorized. Bookmark the permalink.