Coal wars in the Columbia Gorge: A route or a place

Portland, Oregon— Some see the Columbia Gorge as a route, a line on a map to somewhere else, and as a line item on a profit and loss statement.

Others see the Columbia Gorge as a place, a place to live and a place to gather, unique in all the world, a place where the Creator provided everything that the People would need to live and prosper, where Humankind could live in harmony with the natural world, forever.

Powerful forces are at work on both sides of the issue, the present urgent focus on coal, and job creation the argument. Ambre Energy, a mineral exploitation company on the other side of the planet is spending a ton of money promoting its vision of the Columbia River Gorge as (inevitably) a coal chute, and this at what is only the opening salvos of the looming Coal Wars….

The outcome of the Coal Wars of the Columbia River Gorge will soon become one of the most important national public policy issues of our time.

Think Beach Bill of the 1960’s on a much larger scale, far more complex, and with powerful, international, even global opposition.

Remember also that the Columbia River Treaty is expiring and set for renegotiation. Canada is making no secret of its passion for exporting the world’s most noxious substances through the USA by any route available.

According to the US Constitution, the nation’s treaties are the highest law of the land, and the U.S. Army Corps of Engineers has the duty to protect the resource.

Shall the Columbia River Gorge be prioritized as an increasingly internationalized industrial corridor for the benefit of distant selfish and foreign national interests, or shall the preservation of its natural and cultural treasures for countless future generations —the Gorge for the sake of the Gorge—become the overriding public policy of the nation.

The use of the Columbia Gorge is a question that will surely reach the United States Supreme Court, and more than once.

The interests of foreign nations and international corporations in gaining industrial-scale access to the mineral assets of the United States and Canada and in securing lowest-cost transportation to export raw materials and import (through the Gorge) garbage, gasoline, fertilizer and nuclear waste on the one hand….

Everyone else on the other.

Barging on the mid-Columbia River is so inefficient that half of the barges are empty, and would not exist at all were it not for massive public subsidies in the billions of dollars. Public investment, private far-off profit….

The Friends of Celilo Falls is organizing now. More on this soon…. 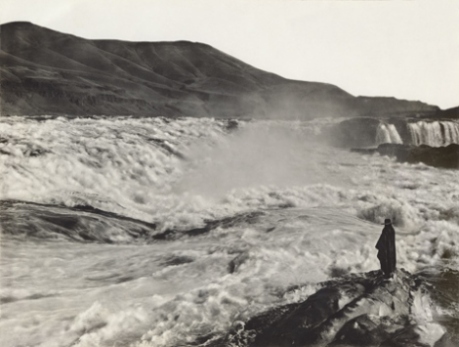 Sean Aaron Cruz is Executive Director of 1000 Nations and a co-founder of The Friends of Celilo Falls. He is the organizer of the Jim Pepper Native Arts Festival. He is co-author of Winona LaDuke's new book, "The Militarization of Indian Country." He is the father of four children who disappeared into Utah in a Mormon abduction in 1996, and the author of Oregon's landmark anti-kidnapping statute "Aaron's Law" (Senate Bill 1041), named for his late son Aaron Cruz. He writes online as Blogolitical Sean.
View all posts by 1000nations →
This entry was posted in Uncategorized and tagged Celilo Falls, Columbia Gorge, Columbia Ri, Friends of Celilo Falls. Bookmark the permalink.