The Industrialization of Celilo Falls, and its failures, pt 4

Change came rapidly to the region once fur traders, settlers and pioneers began arriving in the early 19th century, eager to claim Indian land and resources as their own, bringing with them attitudes of racial hostility and contagious diseases that killed thousands of Natives. The same holocaust that had swept the continent since Columbus had stumbled ashore in 1492 had arrived in the Pacific Northwest.

Historians note 1830 as a particularly vicious epidemic year, decimating tribes throughout the region, particularly along the river systems, which was fine with the settlers, as they wanted all of that land for themselves, as the 1855 treaties and later events would prove.

In 1846, the U.S. and Britain settled their claims of sovereignty over the Pacific Northwest between each other. In 1848, Congress created the Oregon Territory and in 1850, Congress passed the Oregon Donation Land Act, offering Indian land to white settlers, free, all without consulting the Native people who had inhabited these lands for millennia.

A self-appointed decision-making body of white male settlers (Oregon white women did not get the vote until 1912), all of whom were new landowners courtesy of the unwilling and decimated Indians, met in 1849 and named Joseph Lane the first governor of the Oregon Territory.

In 1850, the new Oregon Territorial Government exercised its first use of capital punishment, hanging five Cayuse Indians who may or may not have been involved in the 1847 attack on the Whitman mission, which was itself related to yet another epidemic that ravaged the tribes that year.

This was the first “legal” execution of Indians in the new Territory, but not the last, and extralegal lynchings and massacres of Indians by vigilantes and U.S. Army troops would take place frequently over the next several decades.

In this atmosphere and under these conditions, it would be very difficult for any Native people to find stability and security anywhere in Oregon, and the reservations that would be negotiated would prove to be no sanctuary, no treaty unbroken still into the 21st Century.

Yet, despite these depredations, Native families clung to their ancient villages and fishing sites at Celilo Falls, at Wishram, and at other “usual and accustomed places,” nowhere with more tenacity than at Celilo Village.

In 1852, the U.S. Army established Fort Dalles, just downriver from Celilo Falls, on the Oregon Trail, to protect the interests of settlers in the area, which included the valuable fishery at Celilo.

The Oregon Territory achieved statehood in 1859, and in less than fifty years had completed its new vision of an industrialized Celilo, with fish wheels, roads and railroads, telegraph and telephone lines, and the infamous canal and its barge traffic.

In this series of photographs, the still body of water to the left is the Celilo canal:

Granted, this is one beautiful locomotive…. 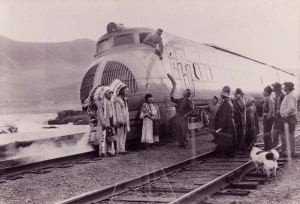 But when the train had left Celilo, the new landscape looked like this: 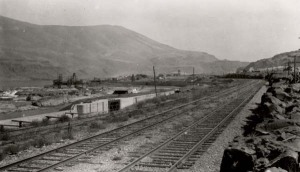 Shell Oil was the first to barge gasoline upriver through the Celilo canal, in 1938: 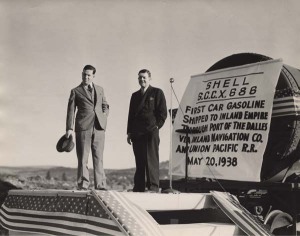 The ancient fishery was in decline, and the worst was yet to come….

The Friends of Celilo Falls is forming….

Coming: The Industrialization of Celilo Falls, and its failures, pt 5

Sean Aaron Cruz is Executive Director of 1000 Nations and a co-founder of The Friends of Celilo Falls. He is the organizer of the Jim Pepper Native Arts Festival. He is co-author of Winona LaDuke's new book, "The Militarization of Indian Country." He is the father of four children who disappeared into Utah in a Mormon abduction in 1996, and the author of Oregon's landmark anti-kidnapping statute "Aaron's Law" (Senate Bill 1041), named for his late son Aaron Cruz. He writes online as Blogolitical Sean.
View all posts by 1000nations →
This entry was posted in Celilo Falls and tagged Celilo Falls, Columbia River, UNESCO. Bookmark the permalink.